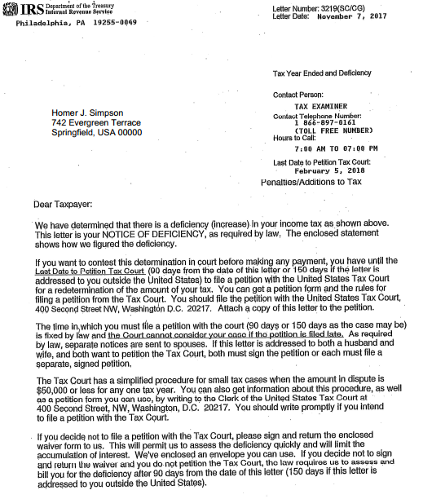 A "notice of deficiency" is a letter summarizing changes to a tax return and giving the taxpayer an opportunity to dispute them.  They are a basic type of document that tax attorneys like myself deal with, and I've handled them with a pretty good success rate. The state of New York also uses a document called a "notice of deficiency" - it is similar, the state procedure is slightly different.

Notices of deficiency is usually sent at the end of an IRS examination.  (also known as an audit)  They will generally summarize any changes to the items on the tax return, such as increases to the taxable income or reductions of certain expenses.  Sometimes the notice will list specific items of unreported income and their source.

Reviewing a Notice of Deficiency

I'm happy to review notices of deficiency as a free consultation, to see if there are any grounds for disputing them.  Sometimes the tax is partially correct, but can be reduced.  For example, a taxpayer may have $100,000 of unreported income on sales of stock, but the IRS' computation of the gain may not have subtracted the original $90,000 purchase price of the stock.  (called a "cost basis")  Feel free to message me and send a copy of your notice if you'd like me to review it.

A taxpayer has 90 days to challenge the notice of deficiency; after this the tax becomes final.  ("assessed", to use the legal term)  The procedure for disputing the tax is to file a petition with the Tax Court.  This is known in legalese as a "petition to redetermine deficiency."  (At the New York state level, something called an informal "Protest" can also be filed)

About the Tax Court

The U.S. Tax Court is a nationwide court which is specifically set up to resolve tax disputes.  It is based in Washington D.C. but holds sessions all across the nation, to the extent necessary.  Because of the long-distance nature of the entity, Tax Court cases are somewhat different than other legal disputes; in-person court appearances are much less common.  In fact, most Tax Court cases that I handle do not require any in-person appearances.   Tax Court cases typically don't involve many of the burdensome things common in civil lawsuits such as depositions, which makes them a lot less arduous (and less expensive)  than other legal disputes.

After the petition is filed, a Tax Court case is usually referred to IRS Appeals for a settlement conference via telephone, and this is typically where they get resolved.  (at least the ones I handle)  If things do not get settled at the conference, then the Tax Court conducts a trial at one of its trial sessions (typically here in New York City) to resolve the case.

I help people with notices of deficiency on a pretty regular basis so please feel free to message me with any questions about your notice. (and whether there is a case for fighting it)