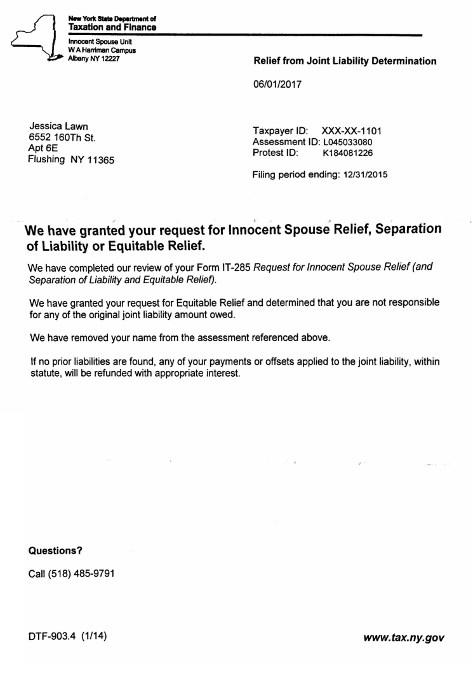 Normally when two spouses file a joint tax return, they both become 100% liable for the tax, even if one spouse earned all the income.  As you might imagine, this can create sticky situations during divorces and separations.  However, the law provides a narrow method of escape from joint spousal liability, known as "Innocent Spouse Relief."

Jessica Lawn was an example of a case where I was able to successfully persuade the state to cancel a tax bill on grounds of Innocent Spouse Relief.  (I resolved it within the agency; the Department of Taxation and Finance agreed that she was entitled to relief)   Essentially, Ms. Lawn and her husband were separated and going through a divorce, and he had signed the tax returns for her (without her consent).  So if you're wondering whether it's possible to actually win these cases, the answer is yes - yes it is.  I think part of the reason Innocent Spouse Relief cases have such a low success rate is because divorcees aren't always the easiest people to deal with.  (Jessica herself later demanded a full refund for "mishandling" the case because I wrote 2014 and 2015 on the papers when in fact the state had only sent a bill for 2015 at the time.