This week I finally achieved my lifetime goal of using the word "ecumenopolis" during a discussion with a client.  Yep, ecumenopolis.  It was exciting!

Oh.  What is an "ecumenopolis", you ask?  :)  Well, it's a city that covers an entire planet.  (or a planet that is one large city, however you want to look at it)  Fictional examples include Coruscant from Star Wars and Apokolips from DC Comics.  (If you think NYC parking is bad, imagine what it's like on those planets...) 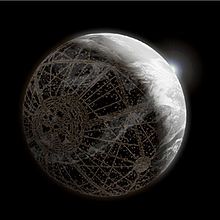 A lot of times people will have delinquent filings and payments; my job as a tax attorney is not only to fix it for them but to also advise them on how bad it is.  (and it's usually not that bad...you set up a payment plan and that's it)  People often think they're going to be severely punished but the reality is that tax agencies (both the IRS and New York) typically just want their money.  It's natural for people to be biased by their own perspectives, but think of yourself as one person in an enormous ecumenopolis - a planet-sized city - and imagine how many other delinquent filers are out there.

Although not quite 5.3 trillion, the city of New York and our 8 million or so inhabitants should be plenty enough to make you feel like you're not the worst offender...

Back to "This Week"